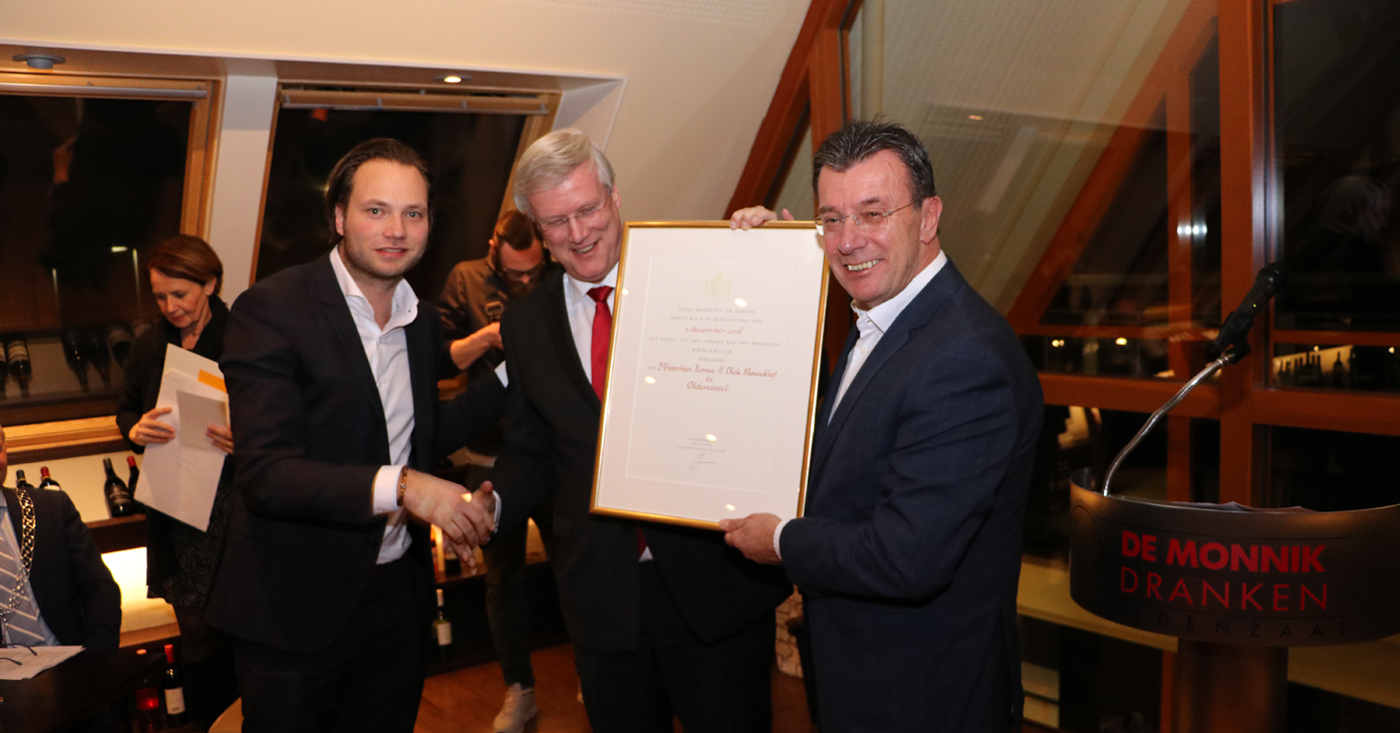 OLDENZAAL - 19 december 2018 In the name of His Majesty King Willem Alexander, mr. Andries Heidema, the King's Commissioner in the province of Overijssel, has awarded the Honorary Title “Koninklijk” (=Royal) to De Monnik Dranken, represented by its director and owner Mr. Hans olde Monnikhof, in a ceremony on Tuesday December 18, 2018 at 19.30 p.m. The King awards this Honorary Title The monarch of the Netherlands has the sole right to appoint the royal title to a company or organisation. The title is not transferrable and entitles the organisation henceforth to add the title “Koninklijk” to its name and to incorporate the Royal Crown in its logo. Companies awarded with the title may opt to use the English equivalent 'Royal' instead. To qualify for a nomination, the company or organization has to meet the following conditions: • it has to be leading in its field of expertise, also taking into account the size, number of employees and turnover of the company. • it has to have national importance; • it has to be in existence for at least 100 years (in principle). Moreover, business practice needs to be impeccable and the company and its management team need to be known in good name and fame and to be of undisputed behaviour. De Monnik Dranken: the company De Monnik Dranken is a 100% family owned company, established in 1918 by Hendrik Olde Monnikhof, who set off locally to sell beers in the area of Oldenzaal, using a dog cart for distribution. After World War II Hendrik olde Monnikhof was succeeded by his two sons Henk and Jan. They expanded the drinks business, employed more people and increased the number of trucks. In 1986 the current director Hans olde Monnikhof, son of Henk, took over the company and in 2014 his son Luuk joined the company, currently in the position of commercial director. Luuk represents the fourth generation. Over the years the company has been located at various sites but always in Oldenzaal and it still is. Meanwhile De Monnik Dranken has grown to be a leading drinks wholesaler and importer of wines and spirits. The company is importing to The Netherlands on an exclusive base from more than 35 countries worldwide. The total assortment is wide and deep, featuring over 9,600 drinks and drink related products. The commercial activities of De Monnik Dranken cover three key focus areas: wholesale, import and brand building. The customer base includes wholesalers, retail organisations, liquor stores, wine merchants, specialist shops and on-trade, all over The Netherlands. Hans olde Monnikhof says: “When I took over my father’s shares in 1986 and became director, we had already made a first step towards national distribution. Gradually, we have been able to expand this, which of course couldn’t be done overnight. It makes me very proud to see what we all have achieved together over the years. Celebrating our 100th anniversary, October this year, was an absolute milestone. Being awarded the Honorary Title “Royal” is the final accolade. Luuk olde Monnikhof adds: “The title “Royal” is unique and means a lot to our family company. For us our people, the relationships with the stakeholders and the brands that we represent make the difference. This great recognition is a token of appreciation for all who are or have been contributing their efforts to the company. Obviously, it also greatly encourages us to shape the future, together with all stakeholders, in a good and well-thought out manner’’.